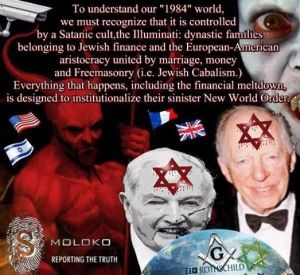 Jewish Elites hold dominating positions in all countries. Their combined influence is hegemonic on a global level.

The American Empire is widely seen as the Hegemon in the world, albeit in decline.

The US has about 5% of the globe’s population and 20% of its economy. This is enough to dominate. Why?

If for instance a strong nation like France is dealing with the US, it’s the same as a normal man dealing with a 30 foot giant, the size of a house.

Clearly we’d deal with such a giant with huge trepidation. We’d be anxious not to piss him off. If we are dealing with him constantly in all sorts of fora, we’d quickly fall under his influence, avoiding to hurt his interests or even feelings. When dealing with others, the question what the big guy would think of it would always be on our minds.

Two great powers in their own sphere, Germany and Japan, tried to go their own way, but got hammered simultaneously by our giant and since then they are both its vassals. As a result the whole of Europe is too and this is why America’s power is supreme.

Just as America is the strongest faction in a world of competing national powers, the Jews are the strongest faction vying for power within the American Nation. Its foreign policy is dominated by AIPAC. Dual citizens hold key positions in the American Government. Nobody can remember when the last Gentile presided over the Federal Reserve Bank. Jews are a very strong force in the media.

Still, when making the point that Jews are extraordinarily powerful, many will say ‘but there are Gentile bankers too’. ‘There are Gentile criminals involved in all shady dealings’.

But it is undoubtedly fair to say the Jews hold a hegemonic position in the powergames of US politics, similar to America’s place in the world.

Furthermore, the Jews are not only strong in the US, but in all white nations. Britain, France, the Netherlands, Russia.

The diaspora is their greatest strength. When local elites are dealing with Jewish influence, they feel the same overbearing power that smaller nations feel when dealing with America. Because the Jewish power is international and this power is backing their local scheming.

Jewish Usury has been the bane of Gentile communities for millennia. For instance, the Magna Carta reads:

“10. If one who has borrowed from the Jews any sum, great or small, die before that loan be repaid, the debt shall not bear interest while the heir is under age, of whomsoever he may hold; and if the debt fall into our hands, we will not take anything except the principal sum contained in the bond.

11. And if anyone die indebted to the Jews, his wife shall have her dower and pay nothing of that debt; and if any children of the deceased are left under age, necessaries shall be provided for them in keeping with the holding of the deceased; and out of the residue the debt shall be paid, reserving, however, service due to feudal lords; in like manner let it be done touching debts due to others than Jews.”

A few years after this pivotal document, the Jews were expelled from England.

The nay-sayers will say that the Jews were used by the King to sheer the flock. And this is true: the Kings taxed the Jews and thus got their share of the plunder. In this sense the Jews were only the second power in the realm.

But the point is that the Jews were second in all realms. And they were working together, whereas the Kings were not only competing with the Jews, but also with each other.

Compound interest makes it unavoidable that the richest own everything within generations. And this is indeed what happened.

Jewish Usury morphed into banking and Capitalism and now undoubtedly rules. All banks own each other, it’s one global monopoly, able to strongarm any competitor. They also own 80% of all Transnationals and a great deal of land.

Conclusion
Once we see that hegemony does not imply there are no competing powers, the idea that there are also non-Jewish partners in crime loses its strength. Combined with the fact that Jews hold strong positions in all white nations, it becomes irrelevant.

Jewry operates as one globally. The diaspora fits hand in glove with their international finance.

It is obviously true that the Jewish masses are not consciously involved. They are often the prime victims of their (and our) supremacist masters.

But Organized Jewry is taking us for a ride to a very dark place and the sooner both the Jewish and the Gentile common man wakes up to this, the better it is.

Thanks for sharing this!

33 thoughts on “Why Do People Have Difficulty Seeing The Jewish Question?”